Lately I've had a theme of reading military and Navy Seals books and a few of them including the one I'm reading now talks about what's known as hell week.

This is part of BUD/S training that anyone who wants to become a SEAL has to endure. It's 5 and a half days of training with only 4 hours of sleep allowed.

Take a second to think about that. 5 and a half days and only 4 hours of sleep.

One thing from hell week that I've heard before is that the SEALS that have gone through it talk about a point when they are so exhausted and both physically and mentally drained and then something happens, they rise above it and almost separate mind from body and tap into a heightened purpose and ability much greater than they thought they were capable of. They have a realization that what they thought was their bar, was actually no where near their actual bar and they push on to move their body to attain things at the new bar level.

I think most people think their top is actually much lower than their actual top potential.

Through reading and listening to some of these stories, one takeaway for me is that the human spirit, you, are capable of much greater feats that you most likely realize. Your potential and stamina, endurance and actual ability is greater than I'm sure you think.

Hell week isn't about physical toughness, it's about mental toughness. A topic I tend to love. It's assumed that these guys who get to hell week are physically capable. The test really comes down to their mental toughness.

Can they endure mentally? That's the test.

I see parallels here to being an entrepreneur or anyone in business trying to attain a goal. There's a mental toughness required to win, persist, persevere and attain the goal.

The mental stamina is really the achilles heel for most people. They can't mentally compete and stick through any and all barriers or rocky terrain that are absolutely on the route along the way. So they ring the bell, throw in the towel and give up.

But to grow a company and persist in any economic condition, to launch a start-up and take it from infancy to mature, you must absolutely have mental toughness and you need to build and inspire a team that can mentally withstand the barriers that are sure to come as well.

This is where resume skills and past experience don't apply. The thing you need to look for in the team is how tough are they mentally. What have they been through and what level of stress or endurance can they handle mentally.

Amazingly, a lot of people appear to be great but only in great conditions. When the tides change, those great people bail or jump ship or quit. That's not what you need on your team.

You need people with a sheer determination and unwavering mental stamina that will stay focused, intense and locked in on the target and see it through to a done. Then you can conquer your own version of hell weeks that come and go as you tackle what's next.

It's incredibly difficult to stop an inspired person

“Budget” is a life sucking word... 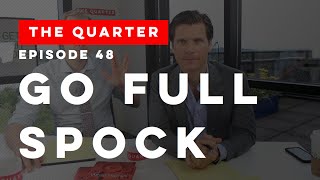 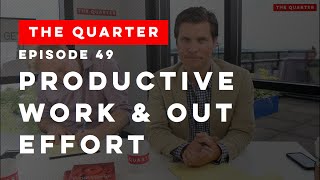 The Quarter Episode 49: Productive Work and Out Effort 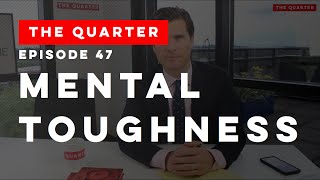